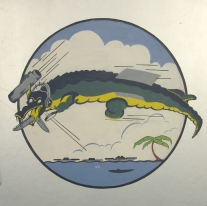 I got through my reporting without a hat ok. I was assigned quarters at the sea plane base and told to report to squadron VP-207 the next morning. VP-207 was to get Martin PBM airplanes. To get trained in the PBM I was assigned to a transition training squadron. The training was done at Banana River Florida. This is now Cape Canaveral.
The PBM was a twin engine sea plane. The first ones were under powered having only 1000 horse powered engines. They had trouble getting off the water. After the engine horse power was increased to 1700 horse power and some of the useless weight like for example, a picnic table, the airplane was more successful.

The takeoffs could be difficult on rough water. The airplane tended to porpoise. The pilot had to control this with the control column. As the nose of the airplane started to rise the pilot had to push the column forward to stop it, but then be ready to pull back as the nose sank. Center of gravity (CG) location was critical, if the CG was too far aft, it could be fatal. A couple of crashes did occur before this condition was recognized and publicized.

After finishing PBM transition I joined VP-207 at Norfolk Va. VP-207 sat around for about a month waiting for airplanes to become available. We attended lectures and listened to senior officers tell how much better the Navy was than the Army. Finally in January 1943 VP-207 got the airplanes. The airplanes were in Corpus Christi Texas. How they got there I don’t know. The PBM’s were built at Baltimore, Maryland. That is a long way over land from Corpus Christi Texas. Only part of the squadron went to Corpus to pick up the airplanes. The rest of us went by ship to San Juan Puerto Rico. The ship was the Albemarle, a seaplane tender. San Juan was to be our training base to indoctrinate the squadron on how to operate the PBM.

The people who went to Corpus had trouble. A big storm came up while they were there. The planes were anchored out in the bay. One of the planes sank. There was only a night crew aboard when a hatch came open and the plane filled full of water. Another airplane was damaged the next day when it was taxied into a sea wall as it was being taxied to the ramp. This airplane was repaired. After that the airplanes were flown to San Juan.

On the trip by sea to San Juan I was sea sick the first 2 days. The sea was rough the first 2 days. I would lay in my bunk and get hungry, but when I got up and dressed and started for the dining room and smelled the food I would get sick again. After the sea smoothed out I got over the sea sickness and enjoyed the rest of the trip. By day it was fun to watch the flying fish, at night the phosphorus water was beautiful.

We arrived at San Juan at night. I left the ship for a short walk and was solicited by some of the local girls plying their trade.

The next day we got our quarters at the navy air base in San Juan. The quarters were ok but I wondered about the mosquito netting draped around the top of the bed. I found out the first night. The mosquitos came out and drove me nuts. The little buggers would hide during the day and come out at night and torture you. The next night before going to bed I put the netting up.

San Juan was a good place to be at. I remember one night club called Jack’s Place. There was good music there. The songs the band played were Latin American type, rumbas, sambas etc. I tried to learn to dance there. We also had to work, that is to learn more about flying the PBMs. We had to learn how to make night landings. The night landings were done in a bay by the Navy base. The day before the night landings were to be conducted an area in the bay was marked by putting out lanterns which were lighted at night to establish the landing area. The technique for the landings was to land by instruments. At night the pilot could not judge his height above the water so he would establish a rate of sink of 200 ft. per minute by using the rate of climb instrument. He maintained the desired landing speed until the airplane hit the water, then he retarded the throttles.

In June, 1943 I got some bad news, I got a letter back I had sent to Willard Gieske, a marine pilot serving in the pacific, saying he was deceased. Willard had been a good friend at home in Kansas City. I also got another bad news letter from Alaska saying EC boots Alter had been killed. Earl had been a basketball star in college. He had been my roommate at Jackson. When he finished his flight training he was posted to a PBY squadron in Alaska.

VP-207 left San Juan in June 1943 all 10 or 12 airplanes. The first stop was Guantanamo Bay Cuba. GTMO is a Navy base at the SE corner of Cuba. How the Navy obtained it I don’t know. It probably happened during the Spanish American war. We stayed over night At GTMO. The airplanes were anchored in the bay and the flight crews slept in quarters which were above the bay. We departed the next morning for Panama. There was a Navy base at Colon which was right next to the entrance to the Panama Canal.

Colon was a lively town full of night clubs and available women. The night clubs had good floor shows and girls who came to your table and drank cokes while you drank booze. You paid for both of course.

We spent a couple of weeks in Panama before departing for our next base which was Salinas Ecuador. VP-207 was going to run patrol flights to guard the Panama Canal.